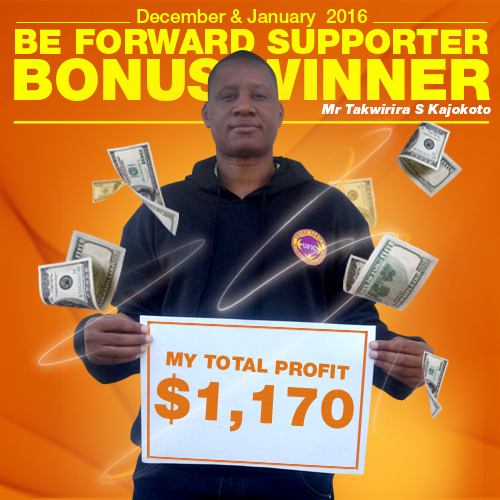 For more than Half year we have been doing the Supporters campaign, We started in Zimbabwe, in February we also started in Tanzania and Malawi. From July we Opened for three more countries on Africa Continent, Kenya, South Sudan and Mozambique, Also for some Caribbean and Oceania Countries. Here is the Winner of December and January campaign. Mr Kajokoto from Zimbabwe.

・What will you use the bonus for?

I am going to save it up for the purchase of my wife’s car.

・How is your feeling for next your campaign?

I am feeling great about the next campaign, I have already entered and going to give the other BF Supporters run for their money.

・What is what is the secret of your success?

My secret is very simple , just believing in God and thanking him for where he has taken me from and where he is taking me to in my business, and not forgetting being honest and transparent in what I do.

As a Be Forward Supporter, you can start just introducing some friends to purchase, and get some extra money. Or you can even move Forward and work in advertisements, so you can start making a monthly incoming. There is many example of Supporters who introduced one friend, Later on Realized that what they really need to do is keep doing the same process, and introduce more for a better Reward and the chance to get the monthly Bonuses.

Are you ready to make some extra cash? Join the Supporters today for Free.